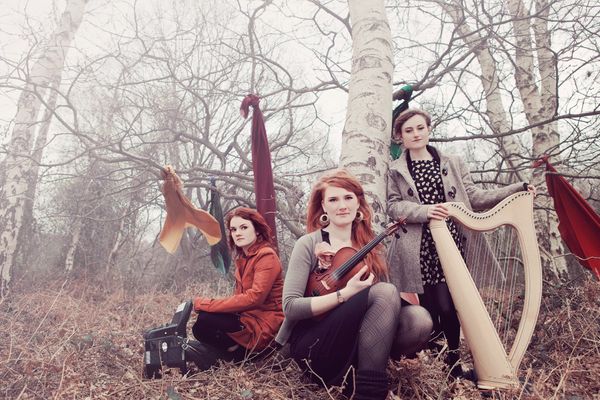 Before I start with Lady Masery I have to talk about Songs Of Seperation, because that’s where it started for me.
SoS is a project with Eliza Carthy, Hannah James, Hannah Read, Hazel Askew, Jenn Butterworth, Karine Polwart, Kate Young, Mary Macmaster and Rowan Rheingans. Bassist Jenny Hill came up with the idea in the aftermath of the Scottish indepence referendum in 2014.U

Containing only the work of women is a response to the marganisation of women’s voices both in music and in politics. 10 songs were recorded on the Isle of Eigg, to be followed by a movie and a tour. For further information go to:
https://www.folkradio.co.uk/2016/01/songs-of-separation-album-review/
The movie inspired me to look for more music by some of those who were not known to me before.

They got their name from a ballad F.J. Child had collected. In the course of this ballad a Scottish lady i sentenced to death because she gets pregnant from a English lover. Lady Maisery became famous for their diddling which is tune singing without words. In contrast to the first impression of old timey English music stand lyrics by Richard Farina or Todd Rundgren and an explicit political touch. Especially Rundgren’s ‚Hones Work‘ is ‚a lament for the everyman in the post-industrial era‘.

Lady Maisery’s last work is a cd with winter song (avoiding the term of christmas album‘. It’s a collaboration with Jimmy Aldridge and Sid Goldsmith , a duo with long experience and a profile as evironmental conscious writers. The title ‚Awake Arise: A winter album‘ makes perfect sense if you understand winter as the time to prepare for rising up in spring. To strengthen the impression that this not the typical christmas album Hannah James uses words from ‚Chants For Socialists‘ by William Morris for the closing hymn ‚Hope is before us‘.

Forgive me if I’m using some words from his poem:
It grows and grows–are we the same,
The feeble band, the few?
Or what are these with eyes aflame,
And hands to deal and do?
This is the host that bears the word,
No MASTER HIGH OR LOW –
A lightning flame, a shearing sword,
A storm to overthrow.

And to add a personal note: the ‚Wassail‘-theme was used this Christmas for a perfect christmas punch, although I prefer cider to beer.

To speak about her is to speak about the Rheingans Sisters, and to speak about them first. That’s because before she released her first solo album there was already music by her and her sister Anne who lives in Toulouse. They are the daughters of Helmut Rheingans who built their violins and banjos. They’ve made three cds so far up to ‚Bright Field‘ – their best effort and most praised. Their horizon is remarkably wider than that of your household English folk duo, since they studied music not only in France but in Sweden and Norway too. Impression from these three countries go into their work as well as nowadays issues.
https://www.rheinganssisters.co.uk/home

In all the music within this project „Lines we draw together“ is the masterpiece, the first and until now only Rowan Rheingans solo album. a Under the title of ‚Dispatches on the red dress‘ Rowan preceded the cd with a tour in June 2019 where she performed the songs dealing with her grandmother’s life in 1940s Germany. The shows were accompanied by discussions with local anti racism activists and Holocaust education campaigners.
The record is both conscious of history, a statement to England and the world today and full of pain and hope.
https://www.folkradio.co.uk/2019/08/rowan-rheingans-the-lines-we-draw-together/

Hannah was brought up in a folkie household and been playing music fromearly childhood onwards. Playing the folk club circuit, atudying music in Helsinki and being a travelling performer (even up to India) all of her life she’s well known for a accordian playing ans the clog dancing which she performa masterly. She first played with Sam Sweeney at the age of ten and has revorded two cds afterwards. Other collaborations include Maddy Prior (Steeleye Span) and Giles Lewin (Bellowhead).
She has her own band with the JigDoll Ensemble. A jigdoll is a wodden dancing doll, prominent in English pubs for two centuries. The JigDoll cd has been produced in Budapest and features Hungarian percussionist András Dés, Marti Tärn from Estonia on bass, French cellist Toby Kuhn and Scottish fiddler (composer and singer) Kate Young.

Their cd contains statements to US gun craze, English inner city life, gender roles as well as dance tunes.
So at least Rheingans and James have a very modern view on folk music. And it all comrs along with a very deep respect of musical heritage or roots.

Hazel and Emily Askew form the Askew Sisters. Quite similar to her partners Hazel Askew is brilliant in taking old songs into the context of issues of climate change and biodiversity. Landscape isn’t just romantic, is has gained a new importance today. Putting songs together for their records mean they have to dig deep to find something suitable. Although many tunes have been made availbale through digitisation projects searching songs has been come increasingly difficult.
https://www.folkradio.co.uk/2019/05/artist-of-the-month-interview-the-askew-sisters/