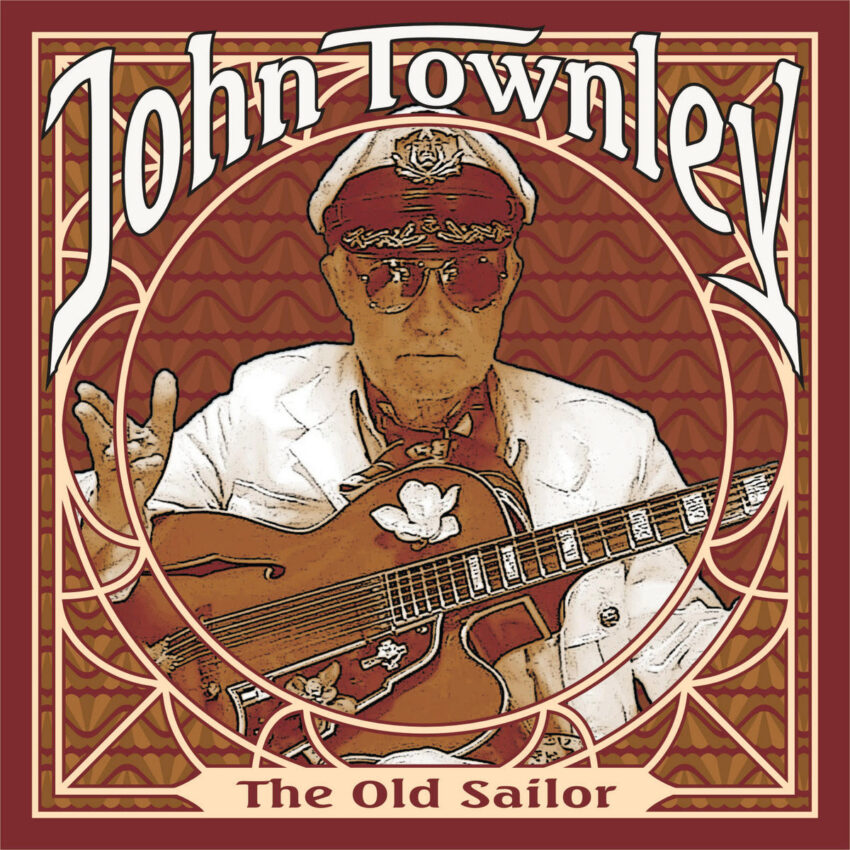 Thanks to Henning Küppers for introducing me to John Townley and Jay Ungar.

Much of the information on John Townley I got from an interview he gave to „It‘s Psychedelic, Baby“ https://www.psychedelicbabymag.com/2021/03/ocean-a-lost-recording-of-the-family-of-apostolic-john-townley-interview.html

John Townley only made a few solo LPs and there are long gaps between them (Discogs lists only his latest and leaves the maritime stuff completely out.). That does sound a bit exotic but not really raises interest in the casual music fan. His Wikipedia entry is quite short, but you get the impression that John‘s a guy with divers interest.

Born in 1945 he entered the musical world of NYC at the tender age of 20, forming a band with David Blue called the Psychedelic Rangers. It‘s a pity that there‘s no document of their work. His own words reveal a similarity between the Rangers and the Holy Modal Rounders, although the Rounders weren‘t existing in 1965 (Steve Weber was John‘s roommate). The Rangers played David Blue‘s songs and when there was only a few people attending David used to eat fire.

The probable career of the Rangers came to a halt when John met Jay Ungar. Together they started playing old time music.

Besides diving into folk music John joined the NYC band The Magicians with whom he recorded several singles including the mini hit An Invitation To Cry, which became popular with its inclusion on the Nuggets compilation. The Magicians were quite popular and even replaced Lovin Spoonful as the house band at the Night Owl. Later these singles were collected by Sundazed Records and in 1999 were put into a compilation cd. The band is not very coherent in their style seeming to collect songs from all over the place (incl. some by David Blue). The song writing duo of Magicians Gordon and Bonner added only two songs. Later on they established a name by writing songs like Happy Together for the Turtles.

In August 1966 John Townley turned 21 and came into a small inheritance (85000$) from a great aunt. This money and some more weird „visions“ led to his idea of creating a studio. Regarding the visions: I was an LSD guide for some highly-placed psychoanalysts. http://www.astrococktail.com/visions.html

The Magicians had recorded in a very ugly and restricted place and John thought of creating the first 12 track studio, mainly because he thought it stupid to have all the nice toys in the studio but are not allowed to play with them. 12 tracks were state of the art and the replacement of knobs with faders was equally new. Besides board-builder Lou Lindauer there were only amateurs. Friends did all the carpentry, wiring, painting , lighting etc. Prime goal was to build a user friendly place near were you lived, with noone making any rules who should do this and that. For more information about the studio: http://www.astrococktail.com/Apostolic.html The name came from the 12 apostles and besides that everyone was rather spiritual, some kind of nuts, although not particularly Christian.

After everyone had said that this would be a complete failure the musicians came: Kenny Rogers and the First Edition, Grateful Dead, Fugs, Spanky And Our Gang and most of all Frank Zappa. Producer John Kilgore on Zappa at Apostolic: https://www.tommoody.us/archives/2008/07/05/frank-zappa-tape-composition-tricks/

John Kilgore was a prolific engineer, others came to watch, went home and that‘s how Record Plant and Electric Ladyland were built. Electric Ladyland was only a few blocks away and turned out to be Apostolic’s rival. Apostolic remained the original and Uncle Meat and Lumpy Gravy led to Sonny Sharrock and Larry Coryell.

Richard Kunc, former Apostolic Studios engineer said: Apostolic was a real Viking ship, a gutsy voyage into the uncharted depths of new toys and new ideas from which came some of the cleanest recordings of that era. (http://www.astrococktail.com/Apostolic.html)

John Townley, Jay Ungar, Peter Smith and vocalist Lyn Hardy are the main artists behind two recordings: Ocean and The Family Of Apostolic

Family of Apostolic https://www.discogs.com/de/The-Family-Of-Apostolic-The-Family-Of-Apostolic/master/607403 was a double LP and the „band“ behind it consisted of 19 people. The concept was that this would be a family affair where everybody contributed to this „primitive performance art“. Style ranges from Chinese Opera over Pakistani folk songs to Scottish traditional music. Music is a happening and it didn‘t help that some songs were released as singles under different artists names.

The album cover shows Townley‘s 3 years old daughter who also sings on Taking Me Home, one of the strangest tracks. Family of Apostolic is a folk album and one that explores the boundaries more than any other album. It‘s equally avantgarde and natural. It‘s this natural character that combines songs and styles (or worlds and eras) and you can‘t make out which songs are originals or forgotten sounds from far away.

Ocean https://lollipoppeshoppe.bandcamp.com/album/ocean was recorded in the summer of 1969 and it was intended to have a performance ready outfit behind the record. But people went seperate ways and Vanguard had no interest in releasing another album, sales had generally dropped. Their crazy, electrified old-timey was influenced by the Holy Modal Rounders and with its various styles it’s a true follow-up the the Family of Apostolic. But after the band falling apart in short time their record drained away. In 2020 Ocean finally was released by Lollipoppe Shoppe.

Apostolic itself was on the way to disassembling and so was any idea of a band.

Some left home to meet Woody Guthrie – John Townley says, he left college to learn from Rev. Gary Davis. Gary Davis was born in 1896, started to play blues in the 30s and played a prominent role in the blues revival in the 60s. Besides John Townley he had a lot of students, from Stefan Grossman, Larry Campbell, Bob Weir to Dave van Ronk. Often John took the subway to the Bronx and listened to the Reverend. He must have liked John cause he hired him to be his driver to the various gigs. The blues revival led to many bands covering him and crediting Davis for his songs: Peter, Paul and Mary, Grateful Dead, Rolling Stones and others.

Townley didn’t turn away from music although he became an editor. With Dan Aguiar he became the nucleus of The X Seamen’s Institute who played sea shanties on a weekly basis in live shows for about ten years. Three LPs made it to Folkways and were even rereleased in 2002. Besides other activities Townley remained active as a musicians, in 1976 he offered a selection of top hits of 1776.

A few songs for you listening pleasure:

Early on John Townley was not the straightest person you can imagine. Drugs and spiruality were part of his life in the 60s. And from that spiruatility onwards he moved to astrology. He wrote several books on the item and remains interview partner on the item. https://www.astrococktail.com/john.html and in German: https://www.astro.com/astrowiki/de/John_Townley

In 2015 John Townley returned to New York and recorded about twenty tracks – 5 years later Lollypoppe Shoppe (LS)  released a selection on their label. LS started in 1999 and released only a small number of LPs until now. The LPs title might suggest that it could be an album full of roaring shanties. That‘s not the case. Townley did what he learned at Apostolic: he used  the studio as an instrument, played all the instruments by himself. Blues songs written by Skip James, Robert Johnson and Peg Leg Howell stay in contrast to Polish sung traditionals, folk and country.

The album was mixed by John Kilgore.

There will be another article on Jay Ungar plus radio specials Roots.