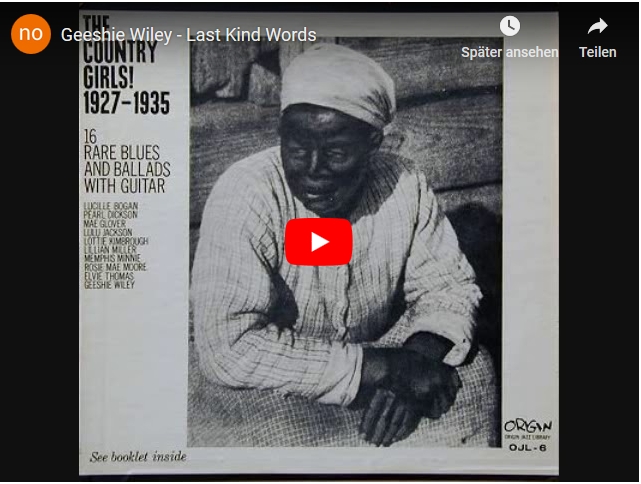 Until 1994 Geeshie Wiley remained virtually unknown, for 64 years she has disappeared – that makes Greil Marcus essay „Disappearence and forgetting“ quite appropriate. During the last twenty years there have been people trying to find out about her and her music. Most information is only related to one single source and when Greil Marcus makes up her life after 1930 his tale’s as likely as what we think to know about her real existence.

Her real name was Lillie Mae and Wikipedia offers three choices for her complete name: Wiley, Scott and Boone. Birthday and -place could be November 8, 1908 somewhere in Louisiana.

Her 15 minutes of stardom came around 1930 although we don’t know how well known she was, and if she had success, how many records she sold. The only source for any knowledge is her partner LV Thomas. If LV stands for anything is not known. In those days it was common to give female African American just letters for their name. Lillie Mae was 22 years old and LV was about 18 years older. Her picture is often painted as that of a strong lesbian carrying a gun under her skirt. Lillie Mae and LV became partners in music and in life for a short while.

LV and Geshie started their musical business in the early 1920s – Lillie Mae must have been pretty young then. The last show they did together was in 1933. in Oklahoma, where Geeshie disappeared completely. LV started to play guitar with eleven and soon made a living out if it. So when she met Lillie Mae she was a professional already. LV claims that she gave Lillie Mae the nickname Geeshie, normally used for young women of rural origin. (In German you would call her a „Landei“.) LV had been quite successful playing along with her partner Texas Alexander who didn’t play an instrument. She accompanied him on guitar. Later he played along with Lightning Hopkins or the Mississippi Sheiks. Since she didn’t want to leave Houston she soon found herself with another partner: Geeshie.

Around 1930 they were discovered by Arthur Laibly from Paramount Records.
Paramount Records developed out of a furniture factory. She build musical furniture which they later fed with their own records. They were quite successful and in 1930 produced a quarter of all blues music recorded in the USA. They were known as the record company with worst quality of their records. LV and Lillie Mae traveled up to Paramount’s recording studio in Grafton Wisconsin. They recorded their repertoire out of which six recordings are known: Last kind words, Skinny legs blues, Pick poor robin clean, Over to my house, Motherless child blues (sung by LV), Eagles on the half. Paramount named them Elvie and Geeshie and those names stuck.

Other recordings by Paramount Records on Archive org

In 1930 another event could have ended their partnership. Geeshie’s husband was murdered (stabbed in the neck) and Geeshie seemed to be responsible. It is not known if she was found guilty, maybe there wasn’t a trial at all. Let ’em stab each other – was the saying and police was often almost indifferent if a black male was killed by another black person. Anyway in 1933 Elvie and Geeshie were still performing together. Someday in Checotah Oklahoma she disappeared. (At some point in Mack’s 1961 interview LV says the last she heard from Geeshie was four years ago. But that led to nothing.

The first time Geeshie’s name or music appeared again was when in 1994 it was used in a film about cartoonist Robert Crumb. That started a new quest by some researchers. Main interest focused on Last Kind Words which had been used in the film.

Discussion of this song focus on two items:

If I die, if I die in the German war
I want you to send my body, send it to my mother, lord

I went to the depot, I looked up at the sun
Cried, some train don’t come, there’ll be some walkin‘ done

My mama told me, just before she died
Lord, precious daughter, don’t you be so wild

The Mississippi river, you know it’s deep and wide
I can stand right here, see my babe from the other side

The Mekons ‚Ancient and modern‘ focusses on a comparison of two historical situations: 1914 and 2014 (roughly spoken). The band came to Geeshie Wiley’s song Last Kind Words via Jeff Tweedy of Wilco who brought a copy to the Mekons recording session. Jon Langford and Lu Edmonds came into a discussion of the song structure, fumbled around with the song, pushing some pieces around and came up with a new song: Geeshie

Greil Marcus on Mekons and Geeshie